The Egogram: A Tool for Change 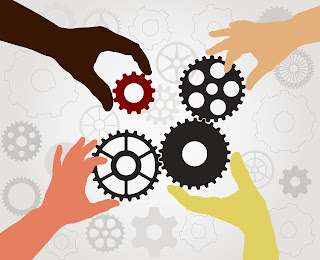 In the previous post we looked a way of describing our personality using the Parent, Adult, Child (PAC) model.
This time we'll explore how we can use this together with The Egogram as a tool for change.

To try this all you'll need will be pen, paper and some undisturbed time for yourself where you can reflect on your process.

On the paper draw a horizontal line and divide it into the five ego states. Initial the five sections CP for Controlling Parent, NP for Nurturing Parent, A for Adult, FC for Free Child and finally AC for Adapted Child.

Next reflect on how you and how much of your time or energy you spend in each of the ego-states, then mark this on the chart as below. 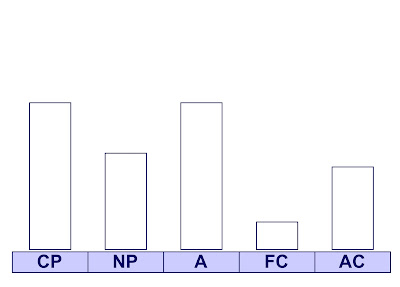 Clive's diagram above shows that he feels he is in Controlling Parent and Adult for equal amounts of time followed by Nurturing Parent then Adapted Child. Clive spends the least amount of time in Free Child.

Clive now considers each of the ego-states individually and indicates, on the egogram, how much time is spent in the unhelpful or negative part of each one, and shades this in. 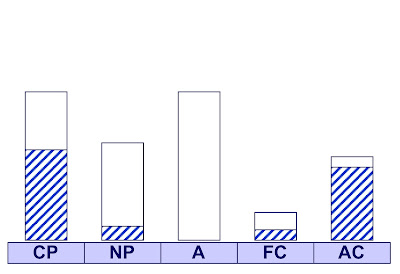 Here Clive has seen that a large part of his time is spent in the negative Controlling Parent and negative Adapted Child ego states. He has identified this by using the guide to the characteristics of ego states that we looked at in the last blog, "Parent, Child & Contaminations".

Reflecting on how this impacts on his thinking, feeling and behaviour he realises that he frequently restricts his spontaneity, choosing to do things he feels are what he "should do" to please his inner negative Controlling Parent. He realises he seldom has fun or allows himself to play.

The most effective way to bring about change in our egogram is to increase the energy, or time, we allocate to the ego-state that we want to have more of.
We do this by identifying the characteristics and behaviours of the desired ego-state and set aside time to do these.

Clive knows his positive Free Child is a football fan, loves going running, is a fan of Dr. Who and enjoys drawing.
However, he hasn't allowed himself any of these activities in response to his negative Controlling Parent voice saying "You shouldn't waste time at the match", "You're not good enough to go jogging", "Dr. Who is for children" and "Your drawings are messy".

Clive now gives himself, and his positive Free Child, permission to do the things that he enjoys and allocates time in his diary to go to a football match with his mates, take up running again, subscribes to a Dr. Who magazine and joins (and attends) his local art group.
As it's been a while since he's done these things, some seem a little awkward or 'clunky', however he's determined to bring about the positive change he wants and is pleasantly surprised that they become more 'natural' to him.

It is a satisfying consequence of 'putting more energy' into the ego-state we desire, that there is less time and energy available to the others, including those we've identified has unhelpful to us.

If you'd like to make some changes why not try using your own egogram?.
You could draw it reflecting on how you consider yourself to be most of the time, or you could use a specific time or activity, such as when engaging in a particular aspect of your work.
What are ego-states you would like more of?
What are you prepared to allow yourself to do?
When are you going to do these?

The one thing that is constant is change, and I believe that we can influence these changes to contribute to our wellbeing.
The use of the egogram is just one of the many techniques available to us.

Things don't have to be the way they are.