Do you ever ask yourself:
"Why does that keep happening to me?"
"Do they see me coming?"
"How do I get into these situations?'

Perhaps you're in a Game.

A psychological game can be described as a way of communicating with others, a concealed message, that is often contradictory to our spoken word. Games are outside of our conscious awareness, yet are things we frequently do and they have a familiar outcome.
Games are ways, that we learnt as a child, of getting what we want and we all still play them from time to time.
The drawback of Games is that they are inauthentic, the outcome is unsatisfying, can be dangerous and sacrifices intimacy.
(Intimacy is when we are expressing our true thoughts, feelings and wants without attempting to exploit or manipulate the other.)

So why do we play them?

One of my favourite tools to understand a Game is: 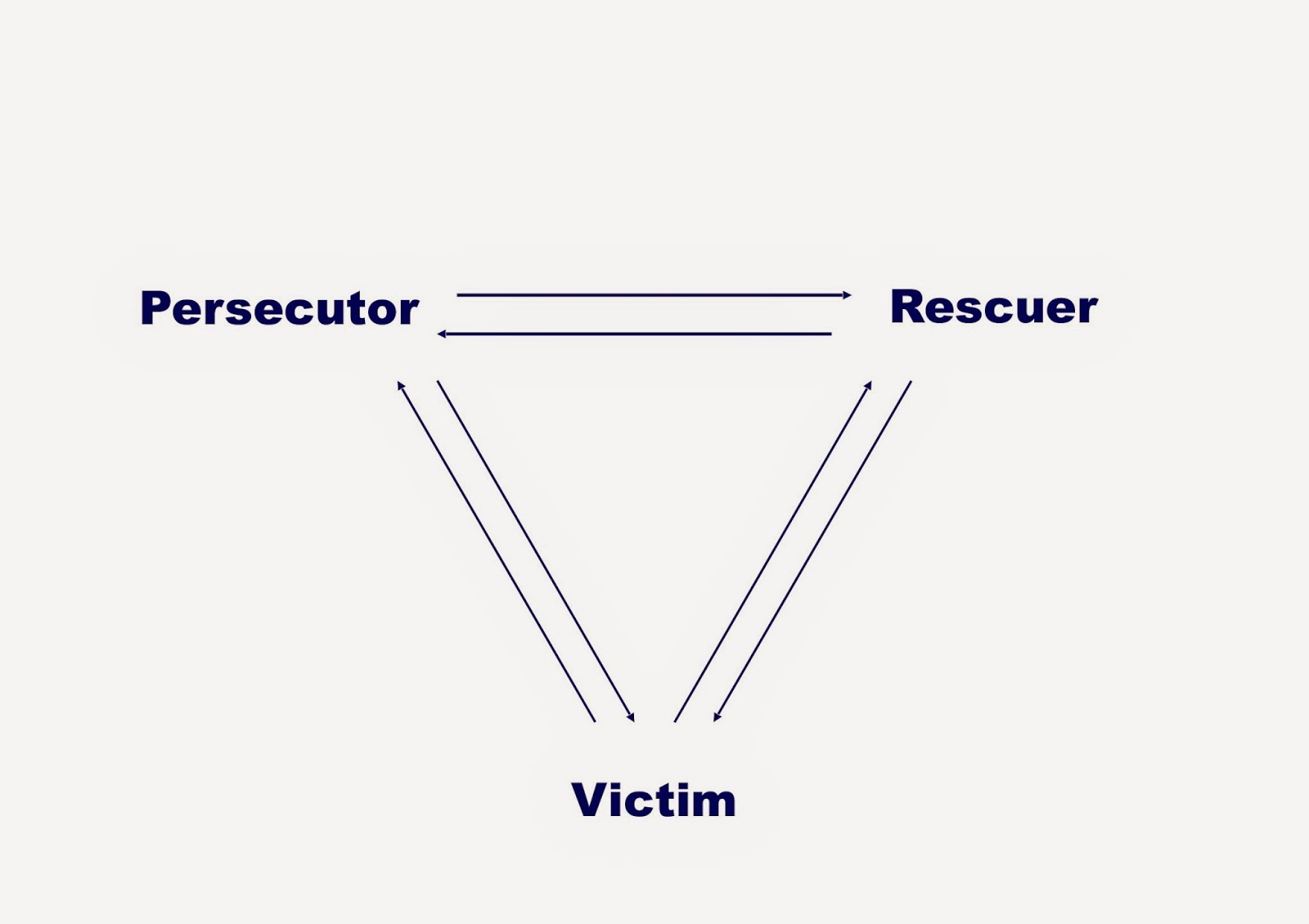 The Drama Triangle is drawn with the Victim role in the one down position with Persecutor and Rescuer above.
The lines are drawn with arrows to indicate there can be movement or switches in positions.
Names of positions are given a capital letter to indicate these are inauthentic positions.

Role:
Acts in own interests and to punish others.

Catchphrases:
"I'll improve you", "You're inferior"

Behaviours:
Puts down
Blames
Dominates
Accuses
'Advises'
Tries to change the Victim
'Knows better than the Victim'
Tries to make the Victim do things differently

Role:
Acts out of concern for the Victim.

Catchphrases:
"I'll do it for you", "You're inadequate"

Behaviours:
Overprotects
Keeps dependent
Enfeebles
Does things for the Victim that the Victim could do for their self
Does more than 50% of what's to be done
Does things even if they would prefer not to

Each of the roles is discounting an aspect of their own or others OKness.

Let's have a look at how these roles might act

Without a word having been spoken the Rescuer has assumed the Victim is cold and should have the window closed.
The Victim says nothing allowing the Rescuer to decide what's needing to be done.

Victim: (Drops a plate when clearing the dinner table)
Persecutor: You clumsy idiot, can't you do anything right?
Victim: I'm sorry, I didn't mean to, I'm so clumsy!


Movement on the Drama Triangle.

If the players keep their adopted roles these situations can repeat and go on ad infinitum. Each continuing with their complementary transactions, with no one rocking the boat.

However, a true Game requires a Switch.
This is when movement occurs on the Drama Triangle, with a jockeying for positions, confusion, anxiety and a "what the heck happened then?".
Sometimes this Switch can be as a result of a players frustration at the limitations of their role or that of the others. Unfortunately, movement to another position on the Drama Triangle still means you're in the Game.

Harry (in Rescuer): If you're going to get home tonight you need to catch the next train.
Clyde: (in Victim): I've lost my ticket and I've run out of money.
Harry (switches to Persecutor): That's typical of you, losing things and expecting me to sort you out!
Clyde: (in Victim): Oh Harry, I don't know what I'm going to do!
Harry (in Persecutor): Grow up!, that's what you can do, I'm not your babysitter. (walks off)

Clyde is left confused and anxious by this Switch in their way of relating to each other.

The Drama Triangle's greatest strength is as a diagnostic or assessment tool.
It can be helpful to identify when we are being invited to, or behaving as either Victim, Persecutor or Rescuer.

However, when move to another position on the Drama Triangle, we may change role but we remain in the Game.

Acey Choy and other authors have suggested that there is an equivalent triangle that is based on authenticity, OKness and that allows intimacy. 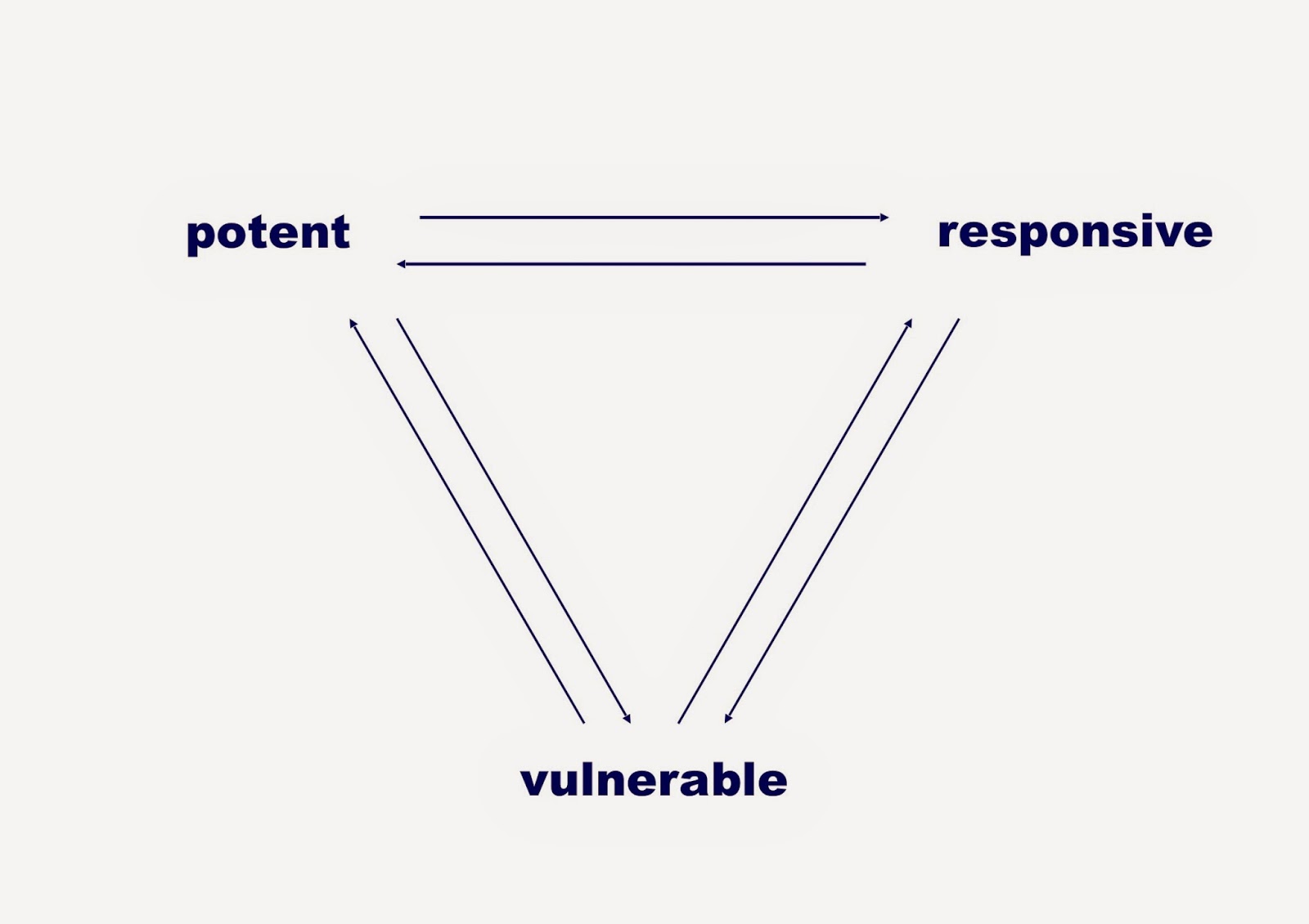 Characteristics:
I respect your interests
I Act in my own interests
I change my behaviour to get my needs met
I share my thoughts and feelings
I don't 'put down' or 'get back'
I leave others be

Characteristics:
I am concerned for the vulnerable person
I genuinely offer help
I allow and facilitate others to do their own thinking
I only do 'my fair share'
I don't do what I don't want to do with a clear explanation

Characteristics:
I am suffering or potentially suffering
I use my feelings as a useful source of information
I works out or finds out how to solve the issue
I think for myself


By using both triangles it becomes possible to understand the way in which we are relating to others. With this understanding we can choose to make changes and move to autonomy & intimacy.

The most effective change is accomplished when we recognise the role we have adopted, or have been invited to play, on the Drama Triangle.
Once identified, we can move to the equivalent position on the OK Triangle.
This move is accomplished by accepting an OK-OK relationship with others, and relating to them using the characteristics describe above. 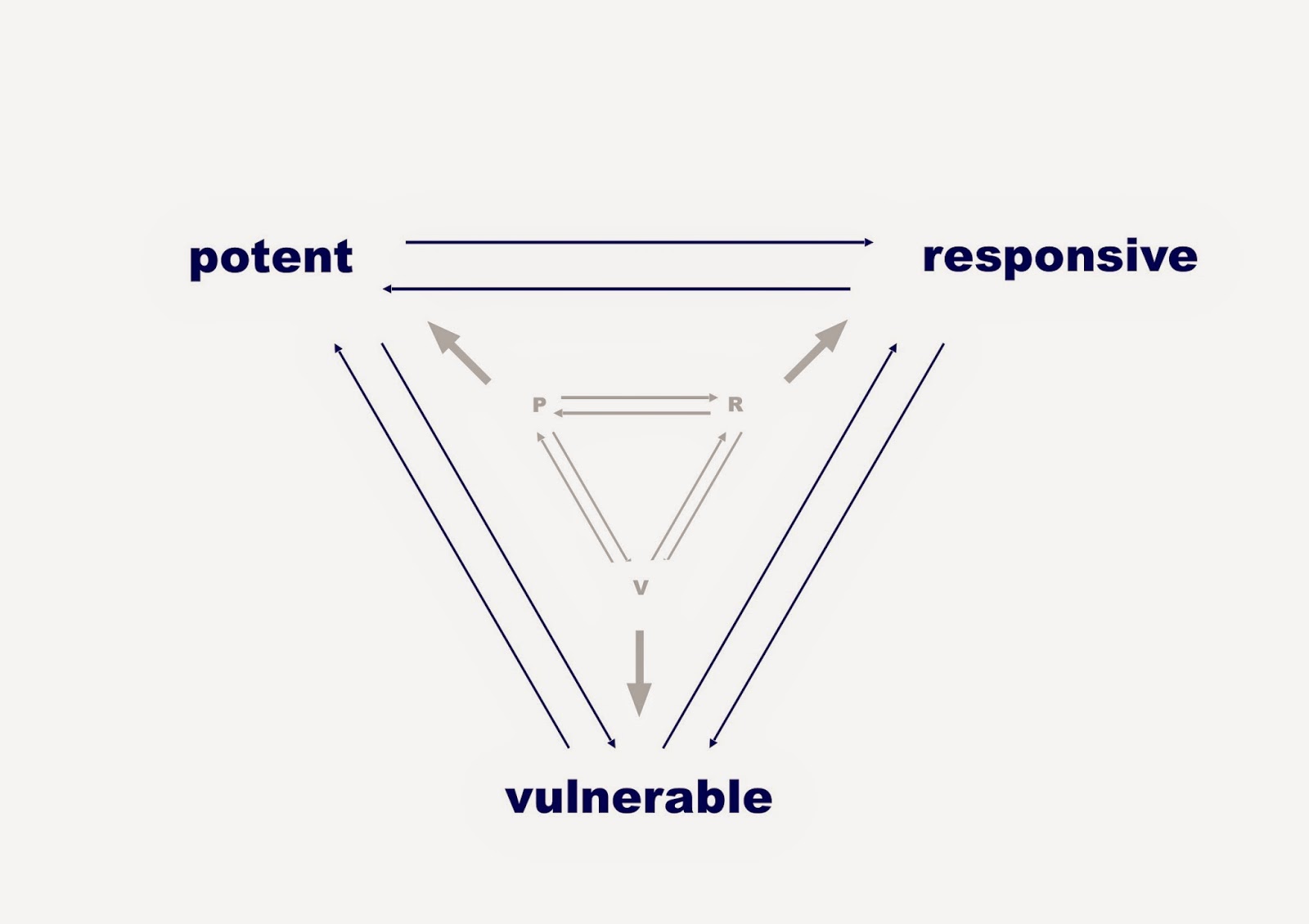 The most impactful change can be when I have been in a Victim position. By recognising the role I have adopted, I can choose to accept my capacity to make changes to manage and reduce my vulnerability.

It is through recognising our vulnerability that we can accept our strength and power to make things different.